I saw an article recently that said that dogs don't like to be hugged. I don't know if the person who wrote this has any experience with dachshunds, but I beg to differ. An exhaustive study recently done here at my house concludes that 3 out of 4 dachshunds most definitely do like hugs, some may even initiate them themselves.

That would of course be my black and tan dapple with one blue eye Spaatz. He will climb along the back of the couch, stand with his front paws on my shoulder then wrap his head and neck around my face. It feels like a hug. Not only can I not see, I can hardly breathe,because he has himself pushed against me so hard. I don't know, maybe he's trying to kill me off so he can have all the kibble. I also pick him up like a baby, with his paws in the air and gaze into his eyes. He really likes it if I bite his neck a little. It's a dog thing.

Now Miss Peaches, the old gal, really wants to just lay in my lap, and I can hold her tight, and she will just go to sleep. That's it, that's all she wants, plain and simple. The bond we share became all the more stronger last year after she had back surgery. I made sure I was there for her and I think she really appreciated that.

Then we have the sweet Sandie-poo. Well, Miss Waggers loves life in general, and hugging, patting, rubbing, playing fetch until your sick of throwing the toy, it's all good. Oh, and dancing too. Loves to dance. I'm know to dance around the house when a good tune is playing and Sandie is my partner. She comes a running if I start to dance, and I swear she knows some of my favorite tunes to dance to 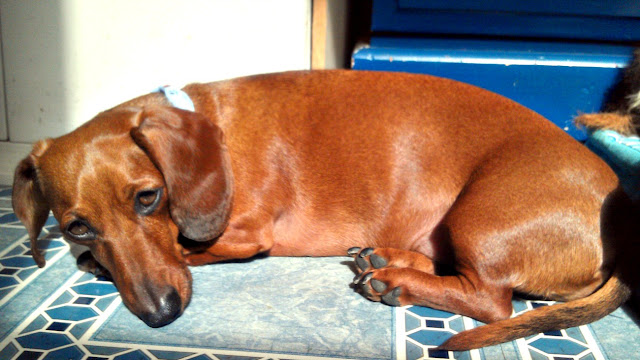 . Then there is Fooze, or Foozeball, or as I currently call him Mr. Foo. Fooze has always been a little off. We got him from the SPCA and his former life was not the best. So Fooze doesn't go for hugs. In fact, he sometime growls when he gets patted, even by me. He likes being patted, I think he's confused. Sometimes it seems like we're connected at the ankle by a chain, cause that's where he is. The other day he was overly concerned about me and insisted on following me up two flights of stairs more than once even though I was coming right back. I ended up carrying him down the stairs more than once that day.

Now I'm just saying there are a lot of exceptions here. Most animals, people, don't like to be restrained. Then there's a problem. But hugs by the right people they love. Certainly not strangers, many would have comfort issues with that. Well if you read this, you, yourself may have a dachshund, or at least a dog that needs hugging. No time like the present.
Posted by Valerie Owen at 12:39 PM 1 comment: