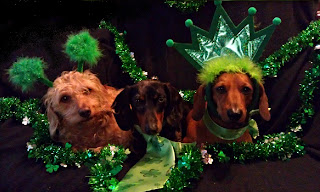 Its a little early I know, but you know you can't put any holiday off to the last minute. It all takes planning, some holidays more than others. Ya gotta hit the dollar store. Atleast to pick up your silly items to dress the Dachshunds in holiday attire. They don't mind too much, there are treats involved of course, little ones because its going to take more than one, especially with three dogs. Although Peaches likes "dress-up", head gear is not her favorite thing. Everyone decided to take this photo shoot laying down.
I hope everyone has a pleasant St. Patrick's day, not too pleasant though. You know it originally wasn't supposed to be a drinking holiday? In fact in Ireland its taken more seriously than people in the US do. That's what they said on NPR. I'm sure they have a few beers too. It actually commemorates the death of St. Patrick in 461. He is credited with bringing Christianity to Ireland even though they kidnapped him and brought him to Ireland as a slave. He escaped, then went back, what a guy! And now they remember him forever.
Posted by Valerie Owen at 8:28 AM No comments:

Don't Hate me because I'm Beautiful

Miss Dirty Feet Again, a photo by batterie61 on Flickr   Ahh, Miss Peachy, she has quite the pose going on here, all she REALLY wants is her tummy rubbed. Unfortunately for her she is about to get a bath because she has been out trouncing around in the mud in the backyard. I know we have had very little snow this winter, but we have had plenty of rain starting before the hurricanes that hit the northeast last fall. She just manages to find it or look for it. On our walk this morning she explored a drainpipe that needed a quick run through. My theory is its a wirehair thing. My old wirehair was the same way, but my two smoothies are not. Fooze in particular will tippy toe around the puddles while Peach cruises through. I might as well stay used to it, I aim to find another wirehair. This can be a tall order, but on I aim to fill.
Posted by Valerie Owen at 8:00 AM No comments:

Enjoying the sun together Enjoying the sun together, a photo by shimmering magic on Flickr.
I just love wirehair Dachshunds, because Watson is always in my heart. I know we will get another wirehair someday, they have a special temperment. I am sharing this awesome photo by Ester Hooff from Flickr where all my Dachshund photos are. Happy Daylight Savings Time! Check your clocks.
Posted by Valerie Owen at 8:05 AM No comments: