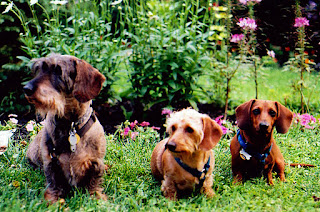 It was fun to watch our new puppy. Dachshunds by nature are a humorous dog, just watching him run was funny. He's so short, does he lift his leg? Not at first anyway. They eventually do, but they may miss their target. Too short to pee on a tire. Interesting enough my female I have now, will during many of the peeing contests I have witnessed will lift her leg slightly. It is a combined squat, hover, leg lift. Its tricky.
We set Watson up with a crate with a pad I made for him in the kitchen. Crate training is a great way to start, it helps with potty training. On his first night he didn't make a mess or cry much at all. I went out in the morning before anyone else, kinda like Christmas. I let him out of the crate, and as I sat on the floor, he came over and laid down in my lap and went back to sleep. I sat there for an hour just admiring him, patting gently, not wanting to disturb him. I was on my way to falling deeply in love with this boy. Watson was definitely the easiest Dachshund I ever trained, potty training was a breeze, sit, rolling over was too easy. It was so a simple twirl of my finger he would roll. 3 dogs later I still can't get any of the others to do it. It was good we got him when we did so we had some time with him before this big trip were going on and he would be going too. His first of many. A dog well traveled
Posted by Valerie Owen at 8:13 AM No comments:

Time to pick out Watson 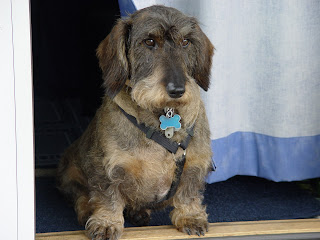 We had to wait a few weeks, but the day finally came. It was the day we were going to pick out the puppy. The pup was officially to be my birthday present, although I paid for most of him. My husband did contribute, this was still my idea. Jerry wasn't sure he really wanted a Dachshund, having had big dogs his whole life. I was absolutly sure. His feelings would be changing soon. mind you our first Dachshund would be a standard not a mini so we were sizing down slowly.

So we went to pick up the puppy. We arrived too early so we went and picked blueberries at a nearby farm. Appointment time came so we skidadiled. We had a choice from 4 puppies from one of the litters. I think there were 3 boys and 1 girl all with color coded strings around their necks. The breeder was trying to talk us into the biggest boy. He wagged his tail so hard it slapped his sides. I had also read some books on choosing the right puppy. You don't want the loud puppy that is climbing all over the other ones and barking a lot. That will come back to haunt you, been there, done that. You also don't want the timid one cowering in the corner. This is under the best conditions though, when you rescue a dog you may not have all the choices. The tests were to either drop your keys by the dog noting the reaction, curiosity not fear is the best. The other is to hold the pup on its back like you would a baby. I tried the keys, no bad reactions. I was picking up the pups , holding them, we were all chatting back and forth. Then at one point I realized I had been holding this one pup for about ten minutes on his back, he was laying there, paws up in the air. He didn't care what I did he was comfortable, The lightbulb went on, this is the one, I had my Watson. I told Jerry this is the one, he's so laid back. He said "okay, if your sure." I was, turned out to be one of my best decisions ever. We paid for him, Jerry drove and Watson rode home in my lap, sleeping all the way.
Posted by Valerie Owen at 9:42 AM No comments:

It all started with Dr. Watson

For a really long time I knew that I wanted a Dachshund. I've had dogs pretty much my whole life, but there was a yearning to have a "Weinerdog". Forward to the early 1990's I was thinking about really getting a Dachshund, my Dad gave me a book giving great detail about dogs and choosing the right one for you. I had always had big dogs, Labradors, Doberman Pincher, Shepard mix and a Beagle when I was real young. After reading the book I decided that not only would I get a Dachshund but I would get a Wire haired Dachshund. Supposedly they had less dander than some other breeds since my husband did have an allergy to dogs. At the time we had a geriatric Labrador named Olive. She was mainly an outdoor dog. The new dog would be an indoor dog. I'm not sure why but I love scruffy dogs and the Wirehair Dachshund is just that. I think in general men also look better with at least a moustache.My husband sports a beard and moustache, he disliked shaving anyway so it was a win win situation. Anyway, I would get a Wire haired Dachshund and his name would be Watson. It seemed perfect a hunting dog named Watson, having been a long time fan of Sherlock Holmes, the character often sporting a moustache. It was still probably 2 years before it all happened but I did start to look for a breeder.
In the meantime the internet became something we all go to when we have something we're looking for. I found a breeder within less than an hour away, she was having a couple of litters in the spring and I could be put on the list. The wait was excruciating, then the pups had to be 8 weeks old before we could pick one out. We were invited to come see the puppies probably about 4-5 weeks old to check them out. These were show dog quality dogs, they had the pups in two pens in the basement of the house. There was an outside entrance, the conditions were extremely clean, not even the smell of dog poop about. The two pens were full of puppies, one had 10 the other12. I put my hand down in the pen and they came alive like a frenzy, all climbing up my arm and trying to chew my watch off. They were so cool and so much fun. We sat and played and held a few of them and made an appointment for when we'd be back to pick out our pup. 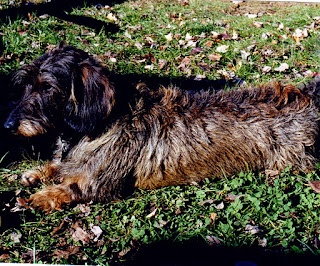 Posted by Valerie Owen at 9:24 AM No comments: