Peaches loves crochet blankets, so much so she can't wait for me to actually get it finished for her her to get comfy. In fact all of My Three Doxons descended upon me as I was working on my latest blanket that the whole project had to be shut down. It's a continuous granny square that I need to spin while I work. Even our "quest" dachshund was in on the action, they just come up, get comfy and go to sleep, then I'm feelin' pretty cozy myself and the look so cute, oh well, maybe later. 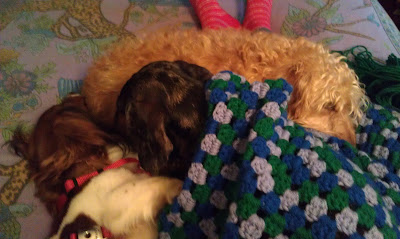 Posted by Valerie Owen at 8:26 AM No comments:

Just a bunch of Tattletales

Well, the Rango fostering project continues. The SPCA thought he was an aggressive dog that would be difficult to place. It turns out he's not aggressive, just terrified of being in a cage with 10 large dogs barking all the time in the same room. It's taking a little while for the pack to accept him, Peaches is still not too sure. Its funny though, I know when Rango has been naughty, all my dogs come in the room where I am and have this look on their faces that says "Rango did it". It's usually getting in the garbage or pooping in the house right after coming inside. I'm happy to say we've had some improvements in these areas lately. I have read dogs don't feel guilt, which I don't agree with. Then how would they know their not guilty, and want to make sure I know it wasn't them?
Posted by Valerie Owen at 8:51 AM No comments: