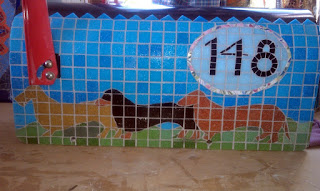 I am happy to share this bit of Dachshund art. I am particularly proud of my mailbox which is a mosaic glass on metal. I'm working on a "life size" Dachshund in broken china which I'll post when its finished.
Posted by Valerie Owen at 8:16 AM No comments:

Spring is about to Spring!! 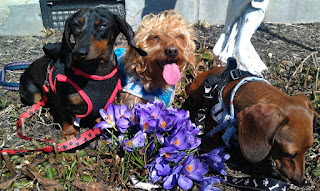 Spring is definitely on its way, as the first Crocuses are signaling. This signal is lost to the pack, just returned from our walk. Feeling a little pooped are we? Fooze tends to be a little camera shy, hence the bowed head. Why would a dog not like having his picture taken? Its certainly not a bad hair day. Anyway we are looking forward to all the flowers that will be coming up and spending more time outside. Happy Spring!
Posted by Valerie Owen at 6:57 AM No comments:

Sweet Foozy has this thing he does when he's anticipating something, mostly food. He spins around in circles. Its hard to capture it, but he does bring a new level to excitement when I come home and its time to eat. This video will gave you some idea why he is called Foozeball.
Posted by Valerie Owen at 8:19 AM No comments: 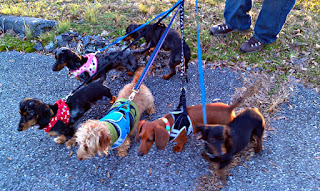 For me I can't understand people who don't like dogs, especially Dachshunds, then you have no sense of humor. I mean you have to admit, they're just funny, just wait 'till you get to know one, it gets better. I mean I do actually understand being fearful of them, I myself had to run the gauntlet everyday to get home from school. I lived at the end of a dead end, then my driveway was another 500 feet long. The neighbors on either side of us both had 2 large German Shepards. I was chased by these dogs on numerous occasions. The last run in I had with them, the dogs on the right side of us started to advance towards me, I didn't run, but sternly said"no doggie". They stopped in their tracks, my voice had echoed off the house, I hastily made tracks home. Shortly after this these dogs were put down as it was found they were behind the killing of sheep at a nearby farm. Obviously, this could have a much different ending, fortunately for me I adverted disaster, I still love dogs, even German Shepards. You must always respect dogs no matter their size, but especially the big ones. But I think there are a lot of people out there that just don't know what they're missing. Dachshunds would like nothing better than to be joined at your hip. I don't mind this most of the time.
When I go out with the pack for our walks you definitely will know who is a dog person and who isn't. I mean I've got three Weinerdogs, any real dog lover will at least smile as they go by. You have the non-dog lovers on one end, who barely give me the space to walk, all self-absorbed staring straight ahead. Then there are those who give you a little space because then don't want to mess up their day by hitting someone. Next are people who like dogs, they may have one, who smile maybe a nod. Then we get into dog people who give you plenty of room, smile, wave maybe even a toot of the horn. The next group, plenty of room ,big smile, they slow way down so that then can admire the dogs. The last group, big smiles, stop if possible to say how much they love your weinerdogs, which you must reply "thank you". I sometimes get asked about Peaches because many people are unaware of the different coat types Dachshunds come in particularly the wirehair. Ha! they're the best! They're all great, but my two sweetest were and are my wirehairs. Watson and Peaches always so easy with the wagging tail.
The photo above is our group from Christmas, including Spaatz, Loreli, Rupert, Peaches, Foozeball and Olivia. This walk was mostly a trail hike which the dogs love, but we had to go on the road for a little while to get back to the car. When you've got 6 Dachshunds you do attract some attention.
Posted by Valerie Owen at 7:58 AM No comments: 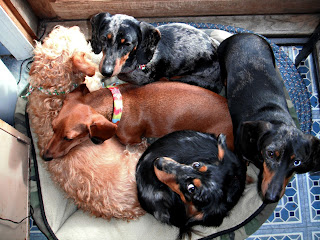 This photo taken just before Christmas last year is one of mine. If you really need a Dachshund fix I have a few hundred pics on flickr http://www.flickr.com/photos/dachshies3/sets/72157626915645112/This photo here includes Miss Peachy in curls, Foozeball in red, Spaatz on the right, ole blue eye, then a couple of guests Loreli,on the top (she is Spaatz's sister) and last but certainly not least Rupert, all curled up in a ball giving us cow eyes. Our guests belong to my daughter Marlena. Actually we are missing Olivia, her 3rd dog who is terribly shy, but getting better. Olivia was absent from some of the holiday Dachshund photos because she was hiding on the couch.
I was once asked why I have 3 Dachshunds, I replied they are just like potato chips, they're so good you can't just have 1.
Posted by Valerie Owen at 1:38 PM No comments:

Is It Spring yet?

I know its been a mild winter so I shouldn't complain, but its also to the point where I'm just ready for the cold weather to be over. The dogs aren't quite so picky, especially Peaches with her woolly wire hair coat. Fooze is probably the least fond of cold, preferring to dart out quickly, do what he has to and get back inside. Spaatz doesn't seem to concern himself which such things because there is probably something outside that needs to be hunted down no matter what the temperature outside. He really isn't really that concerned about rain, which is unusual for Dachshunds, Watson could hold it for days if it was raining.
But since I will be holding the leashes some real Spring would be nice. I unfortunately don't have the best place to walk the dogs. our road is busy and in some places very little shoulder to walk on. Once I get us down our road to a neighborhood where its one lane each direction with a wide median its much nicer. Lately its the wind that's the biggest thing to deal with. Cuts right through you. Anyway I took the dogs for a ride in the car and that was so exciting there all shot now sleeping int the sun. I'll try to do a little workout and we'll get out there another day.Please enjoy a video of a walk from last year, what you can't see is that my husband is walking ahead of us dragging some trash he found on the roadside so they're trying to keep up
Posted by Valerie Owen at 9:00 AM No comments: