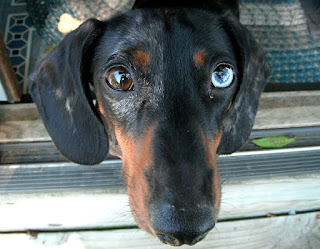 Spaatz, a name derived from my maiden name. If by some small chance you might wonder, any relation to General Carl Spaatz, the answer is yes. We always consider our dog names pretty seriously. When we hit on the right one its an aha moment. Spaatz was such and of course he has a laundry list of nicknames, Spaatzer, Spaatzie, Schpuutz, Spatzle, and naturally "babyman". He is Babyman, and it started when he was a puppy and has stuck. He is still full of puppy, loves to play with squeaky toys, tennis balls and he keeps a constant vigil at the back door for small woodland creatures that might be trespassing. Peachy was our number one hunter, but she has let Spaatz take the lead. He has lightning speed. I hope to race him possibly in the future. He needs intensive socializing though, his one drawback.
I had for a long time wanted a dapple dachshund to add to our pack. Dachshunds come in so many color combinations, not to mention coat types. Then we lost our Watson, which was very tough, fortunately Peach and Fooze were here for us, they missed him too. Sometime after that my daughter called from Florida, she had found a litter and was going to get a companion for her dapple longhair Rupert. She wanted to know if I was interested, there were some dapples in the group. I said yes, she said there was a dapple boy with one blue eye. That was for me, my in-laws had had a Husky with bi-colored eyes that I liked. She got a sister and a friend of hers got 2 black and tans. We got a bulk discount. Soon after she flew up with the two pups and we had a three pack again. Jerry was a little annoyed with me that I got this dog without discussing it with him. He wanted another wire hair. I wasn't ready to get a Watson replacement, I had been looking for a dapple before we lost Watson, plus he just brought Fooze home. He has gotten over it now, although I feel another wire hair coming.
Spaatz is a sweet boy that would like nothing better than to stand on your chest and push his face and neck against yours almost to where you can't breathe, then sneak some kisses or clean your nose for you. His sister does the same thing. His barking is getting better, I try to walk the pack everyday as weather permits. He sleeps with his head on my shoulder. I once mentioned to a woman who fostered dogs that I had Dachshunds, she said "oh Dachshunds sure do love their people". They sure do, and if you are fortunate to know that devotion, then you know how awesome it is and how easy it is to treasure these little dogs.
Posted by Valerie Owen at 12:36 PM