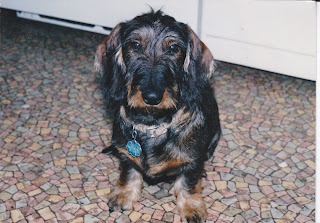 We had gotten Watson in July when he was 8 weeks old, then a couple weeks later we went on a big camping trip to Ocean City, Maryland.  We went to a great place with access to the water and their own western themed town. Frontier Town had its own water slide park also. The kids were not bored. The boardwalk was close by too.
Watson was just a little guy. I can still remember on the ride down from our home in NY that he would sit on my lap for awhile, then he would go over to Jerry's lap. It was back and forth the whole way.
Interestingly enough our campsite was next to some people that had a long haired Dachshund. That dog would sit there tied up and bark all the time. Of course this was annoying. Watson was only a puppy and he was quiet as could be. Jerry eventually talked to the guy and said "look, if our little puppy can be quiet you'd better find a way to keep your adult dog quiet". A little foreshadowing for the guy who would become the dog warden some years later. People seem to do what Jerry tells them. At 6 feet tall 240 lbs he does make an impression. We didn't have any more problems
We took Watson to the beach for the first time. He loved it, dug himself a big hole and got in it.
When we got back to the campsite he needed a bath, so I took him into the ladies bath house. I went to a big laundry type sink. He was small enough at this point that I could hold him in one hand under the faucet and wash him. This was the first of many baths in his life and I found it to be profoundly funny. When you wet him down he looks more like a smoothie and so sad and pathetic. He was very cooperative though, which made the process easy and good. We could see quickly what an awesome little guy we had got.
Posted by Valerie Owen at 12:28 PM