Can You Guess Who Shredded the Dogbed??

Can you guess which one of these handsome lads might of shredded the dog bed? They look so innocent don't they. Sweet Foozie on the left in red. The original troublemaker, still the go to guy if the trash has been gotten into, but has settled down a bit now that he's five years old. When we first got him he picked on Miss Peaches terribly, would bite her butt and yank on her ears . Now that he stopped, we got Spaatz. Spaatz, the new kid on the block since 2010, will be 2 in June. He currently terrorizes Miss Peachy, don't get me wrong, she can take care of herself. She enjoys sparring with him, he can be relentless though, then she'll get nasty with him and he backs off. He is the royal destroyer of anything that squeaks. Its his mission in life, this includes small woodland creatures, which he's only had a couple of close encounters with. 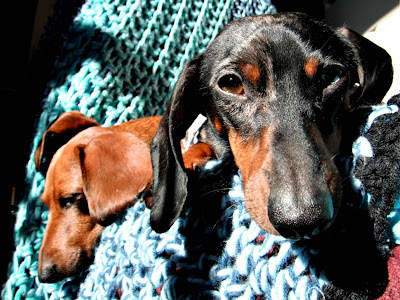 The Boys- Partners in Crime.
Now if your guess was Spaatz, you would be right. Spaatz does like to shred things, sometimes they don't even have to squeak. Now mind you the worst part, after cleaning up all the foam bits all over the kitchen is that I made this bed for them when I got a great deal on some 4" foam and made a cover from some bright outdoor fabric. He opened the velcro at the end and proceeded to bite little bits of foam out and send them strewing all over the place. It wasn't the welcome I had in mind when I walked through the door.
Posted by Valerie Owen at 7:57 AM